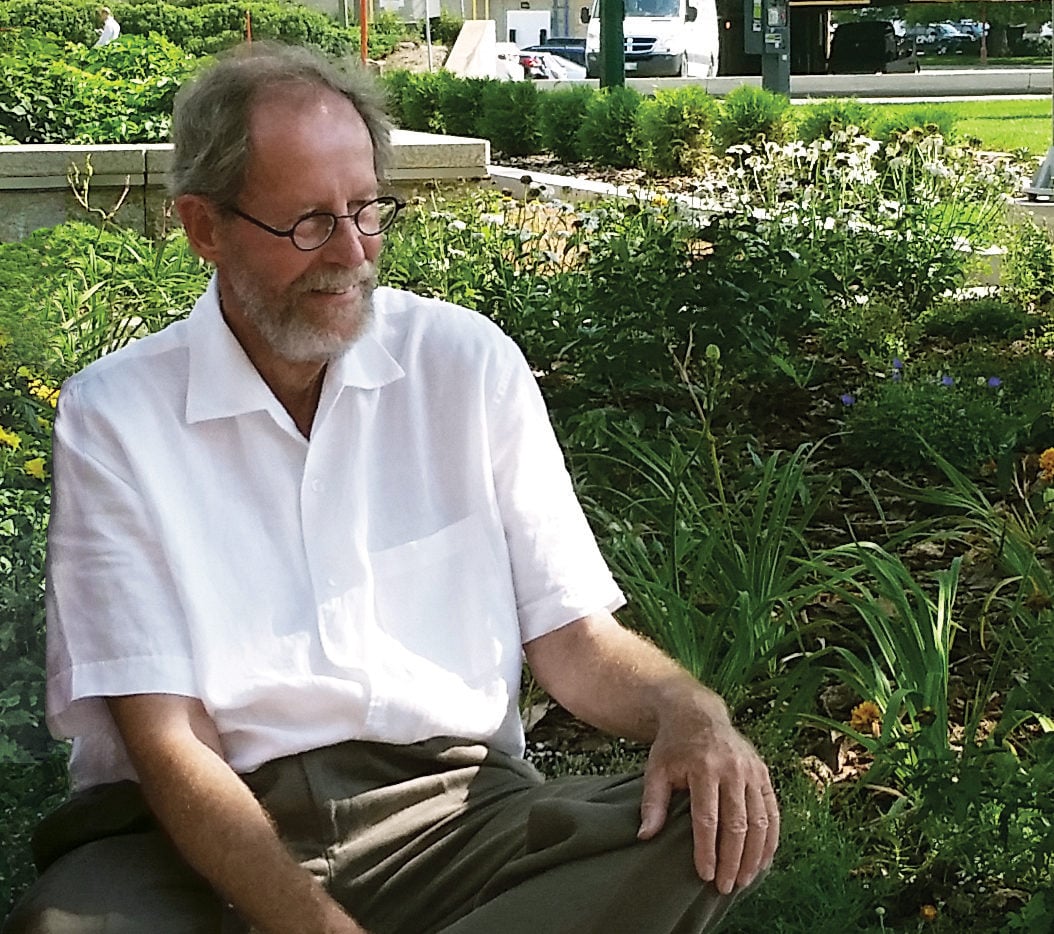 IT’S DARK AT 9 a.m. on a frigid December morning, but still crowds assemble. There is dancing and drumming. A bonfire. And if it is clear, the first glimmer of sunlight slipping through the narrow cobblestone slot will be greeted with cheers. It’s an odd sight in downtown Winnipeg, but the winter solstice celebrations at Oodena Celebration Circle echo rituals that have been played out around the world for millennia.

At 8:25 p.m. the same day, the star Rigel in the constellation Orion will pass through the sighting rings on the southeast armature. Like the 16 other star alignments marked by Oodena’s steel armatures, this passage will occur without ceremony, but there is something powerful about its regularity, and something wondrous in our ability to tap into these churning cosmic cycles that our forebears called the Music of the Spheres.

Oodena is located in Winnipeg at the junction of the Red and Assiniboine Rivers, in a redeveloped downtown railyard site called The Forks. The name “Oodena” comes from an Ojibway word approximately meaning “Heart of the City.” The site was previously profiled in an article written by Garry Hilderman and published in the CSLA/AAPC 75th anniversary edition of LANDSCAPES PAYSAGES, Spring 2009. Oodena has gained international attention and received a number of awards including an Award of Excellence (National Honour) from the CSLA in 1995. Garry, Oodena’s creator, considered it the best embodiment of his design philosophy: that every project should create a space that touches the spirit of those who use it, and as profoundly as possible remind us of our place on this earth, and our environmental and cultural heritage.

Garry Hilderman passed away on January 21, 2016. Since then, his friends and colleagues have been reflecting on his influence on the design community in Winnipeg and beyond. This article is an attempt to convey a few aspects of his singular vision and voice.

Like so many of the projects undertaken by Garry and his colleagues at the firm he founded, known today as HTFC Planning & Design, Oodena is imbued with a powerful sense of time: the passage of the sun through the sky, the change of seasons, weather and climate, the orbit of the earth. Garry had a remarkably long view of things and inspired a similar outlook in his co-workers. Every major project started with a survey of the human and natural history of the site, often stretching back to the last ice age. His favourite projects were those with interesting pasts and the opportunity to influence future generations: the Red River Floodway project; the negotiation of land claims with Indigenous clients to address grievances dating back to the time of treaties; the Ducks Unlimited headquarters; FortWhyte Alive – all were projects with client relationships spanning decades and touching the lives of multiple generations.

Garry’s formal path to Oodena, as a landscape architect, began with the firm’s 1972 commission from the Manitoba government to undertake an inventory and study of the Red and Assiniboine Rivers in Manitoba’s Capital Region. The firm won a second commission in 1979 to prepare a Master Plan for the 90 km length of Red River from St. Norbert to Lake Winnipeg: that plan identified The Forks as the most important site for heritage conservation and recreation within the City of Winnipeg and the river corridor. The report proposed numerous heritage interpretation, commemoration and conservation projects that were subsequently built, including a major public park at the “East Yards” (The Forks today) and a proposal for Upper Fort Garry, located across Main Street from the Forks. These projects have transformed Winnipeg’s downtown, and form the heart of what was recently described in the Winnipeg Free Press as a “river renaissance”.

“We must begin to utilize the historical significance of the place in formulating design solutions as much as we use topography, climate and vegetation pattern. We must look for historical spirit as much as for objects with historic value.”

Garry Hilderman, from a lecture at University of Toronto, 1980

ONE TIMELESS WAY OF BUILDING

Garry’s works were dense with time, full with time. His way of seeing the world was a Timeful Way – yet he also advocated for design that is Timeless: Design that adheres to the classical principles of commodity, firmness and delight; Design informed by spirit of place, which responds to site and touches the human spirit; Design that is profound, meaningful and fashion exempt. Garry would agree with Christopher Alexander, author of the 1979 classic, The Timeless Way of Building (Oxford University Press). “There is one timeless way of building. It is thousands of years old, and the same today as it has always been.”

THE ESSENTIAL DIALOGUE WITH HISTORY

Garry’s final accomplishment was Upper Fort Garry Provincial Park, a project that began for him in 1977 and remained close to his heart for the balance of his career. This site in downtown Winnipeg was once the hub of the fur trade operations in Western Canada, and the epicentre of the Red River Resistance. Activities there played a central role in the formation of Manitoba as a province, and paved the way for a transcontinental Confederation. The fort was dismantled in the 1880s and the city grew up around it, leaving only the north gate to languish between a PetroCanada station and a curling rink. The 1977 work, one of the first projects completed under the Red River master plan, included historically accurate reconstruction of sections of the fort’s timber walls, and a small interpretive space to flesh out a few of the site’s many stories. Garry insisted the walls were necessary to help visitors relate to the scale and extent of the fort, which was over 500 feet long (over 150 m). In subsequent work on the site, the designers proposed to remove a small portion of the walls for better circulation and sightlines and were denied by Historic Resources Branch, who now considered Garry’s reconstructed walls “an integral part of the site’s heritage resources.”

When a proposed highrise development on the property threatened to overshadow the fort site in 2008, Garry was among several prominent citizens in Winnipeg that formed the Friends of Upper Fort Garry to successfully oppose the project, and raise millions for the development of a new interpretive park in its place. Between 2009 and 2016, he was a tireless champion for the project, assuming a nearly full time role promoting, fundraising, doing battle with various administrations, and reviewing all design and construction activities, which are wrapping up mere months after his death.

Though he was not the designer but the client in this case, he exerted a strong influence, and Upper Fort Garry Provincial Park reflects many of the themes that ran through Garry’s body of work – his disdain for convention but great respect for heritage, his sense of wonder, his long view, his focus on connecting with youth, and the notion that history is not an inert relic but a living, essential dialogue.

SAYING WHAT NEEDS TO BE SAID

In addition to thousands of executed works, Garry’s legacy is also manifested in the firm he founded which carries on the traditions, in his partners and staff who share his philosophies, in the hundreds of practitioners across Canada and around the world who were students and/or employees, and in the clients and the public whose lives are touched by the work.

At heart Garry was a storyteller, driven by a need to say what needs to be said, and an uncanny ability to zero in on what matters. And so the timeful places he created and guided into being live on, as captivating and relevant as ever.

This error message is only visible to WordPress admins